Dr. Nancy Hingston of the Department of Mathematics and Statistics at The College of New Jersey has been invited to lecture at the 2014 International Congress of Mathematicians (ICM). The ICM will be held in Seoul, Korea from August 13-21, 2014. Dr. Hingston, an expert in differential geometry and topology, has been invited to give one of the 13 lectures in the Geometry session, one of 19 sessions comprising the scientific program at the Congress.

The International Congress of Mathematicians is the largest and most prestigious mathematics conference in the world. It is hosted by the International Mathematical Union (IMU) and meets once every four years. The most prestigious prizes in mathematics, including the Fields Medal, the Nevanlinna Prize, the Gauss Prize, and the Chern Medal are awarded during the Congress’s opening ceremony. Each congress is memorialized by a printed set of Proceedings recording academic papers based on the 130-175 invited talks intended to be relevant to current topics of general interest. The Congress and Proceedings serves to spotlight the most important mathematics currently being done. An invitation to give an invited talk acknowledges the importance of one’s mathematical work.

The first International Congress of Mathematicians was held in Zurich in August 1897. The organizers included such prominent mathematicians as Luigi Cremona, Felix Klein, Gösta Mittag-Leffler, Andrey Markov, and others. The congress was attended by 208 mathematicians from 16 countries, including 12 from Russia and 7 from the U.S.A.[2]

The scientific program consists of plenary lectures (in 2010 there were 20) and invited sectional speakers. In 2014 there will be 19 sections covering the many fields of mathematics. Logic & Foundations (3-5 speakers), Algebra (4-6 speakers), Number Theory (9-12 speakers), and Geometry (10-13 speakers) are some of math 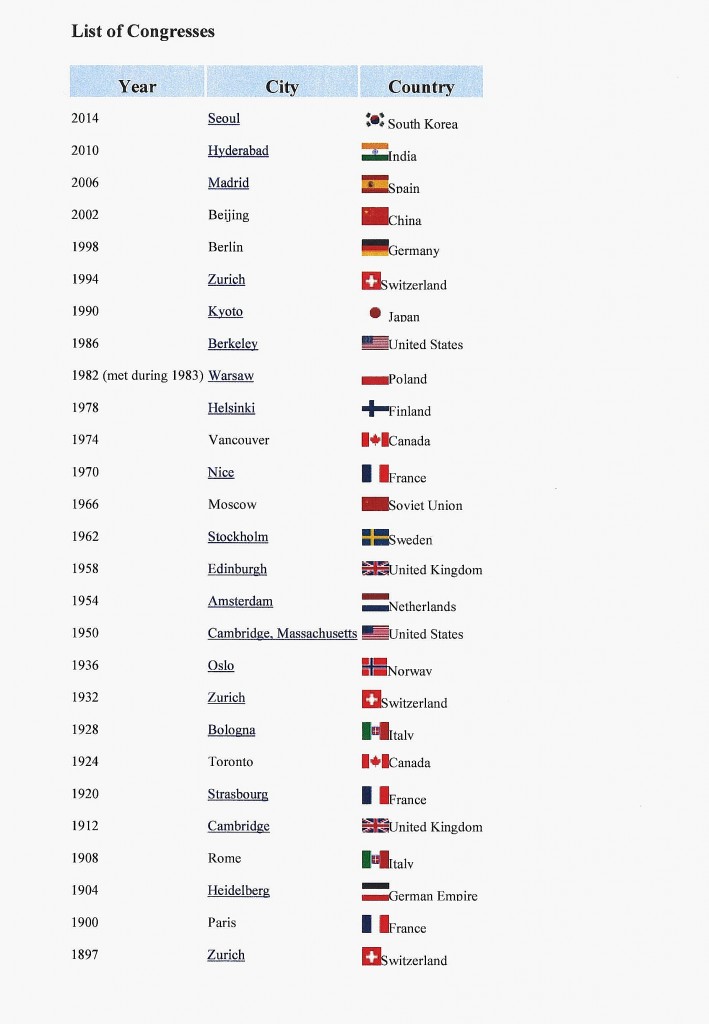